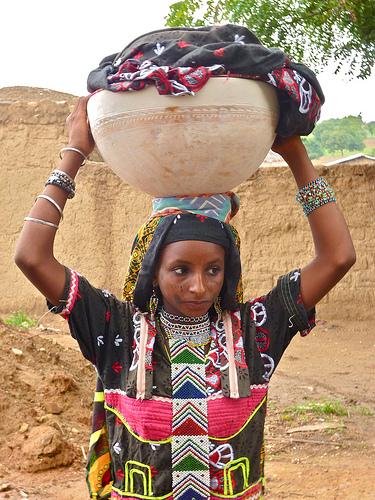 Next month, Blacksmith returns to Senegal to provide livelihood training to women so that they will not have to go back to the dangerous job of backyard battery recycling–the activity that triggered the tragic lead poisoning outbreak in 2008 that killed 32 children in Thiaroye Sur Mer.

“Women should not have to choose between earning a living wage and the safety of their children,” says Kira Traore, Blacksmith’s program director for Africa. “By teaching them alternative income-generating activities, we are providing them with a long-term solution, and ensuring that they will not return to illegal battery recycling.”

Over 100 women will attend two training sessions held at the local youth center.

The first training session will focus on how to fortify grains to increase nutrition and crop yield. The women will be trained on mill processing techniques, and will have access to two mills that will be maintained by the local women’s association.

At the second training, the women will be introduced to hydroponics so they can grow crops without soil, using a hydroponics table filled with mineral nutrient solutions.  Because the water used stays within the system, this method reduces the amount of water needed, which is essential during the dry season. Hydroponics will allow the women to grow crops year round without being dependent on soil quality or weather.

These techniques will not only help the women feed their family, but also produce extra food for sale, providing them with a sustainable source of income.

Following the lead poisoning tragedy, Blacksmith conducted house-to-house cleanup (see photos) and taught villagers about the dangers of lead. Over 100 hones were cleaned, and  3000 cubic meters of contaminated soil was carted away.  Today, lead levels in the soil of the affected villages are below the U.S. standard of 400 ppm, down from 200,000 ppm measured at the height of the outbreak.

For many men and women around the world, recycling old car batteries by hand to extract lead is the one of the few ways of making a living. They recycle the batteries at home, breaking them in their backyards, smelting lead in their kitchens.

In March 2008, Blacksmith Institute was contacted by the Senegal Ministry of Environment following the sudden deaths of 32 children under age five in the community of Ngagne Diaw, Thiayore-Sur-Mer, located on the southern end of the Cape Vert Peninsula in Dakar. The children all died from acute lead poisoning due to constant exposure to lead dust in the air, soil and water. The source of lead was quickly determined to be the informal recycling of used lead-acid batteries (ULAB).

Recycling lead this way was a popular way for women to supplement domestic income.  Lead was used and sold as weights to hold down fishing nets. The women would break open the batteries by hand in their backyards, and melt the lead in pots and pans in their kitchens, often with children playing nearby. Lead dust covered almost everything in their homes and community, poisoning everyone.

But children begin to die after a ‘lead-rush’ increased the exposure to children at exponential rates. A newly opened lead smelter offered $100 per day for women and children to collect and sift through lead waste. In just one hour, the women were able to earn the same daily wages as someone who worked all day in the market.

Blacksmith worked to address the emergency with a three-phase remediation strategy. The project had two distinct goals: in the short-term, to completely remove the threat of lead from Ngagne Diaw; and in the long-term, to ensure the responsible collection and recycling of used lead-acid batteries so that lead from this source is no longer a threat in Senegal. These three phases of the project were successfully completed in February 2013.