Why Are Millions of Children in Mexico Still Suffering From Lead Poisoning? 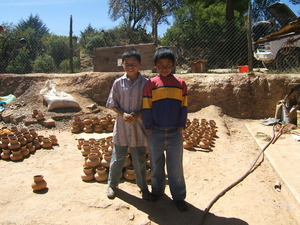 In 1991, the daughter of the U.S. ambassador to Mexico was found to have high lead levels in her blood. It launched an outcry on both sides of the border against the use of toxic lead glazes in Mexican pottery, a tradition dating back hundreds of years.

But while the flow of lead-glazed pottery into the U.S. has dramatically slowed because of an import ban, toxic wares continue to be produced and used by many families in Mexico even though there are laws preventing the use of lead glazes.

A report in the Huffington Post looks at why lead persists in Mexico, and offers a quick overview of the history of the problem, leading up to Blacksmith’s renewed effort next year to launch a major education campaign starting with potters, pottery sellers and consumers in one state.

Among the goals, the campaign will encourage potters to switch to a cheaper, lead-free alternative glaze developed by scientists at Mexican universities with support from Blacksmith and a local NGO.

This entry was posted in Lead, Projects/Solutions, Uncategorized and tagged Mexico lead pottery. Bookmark the permalink.