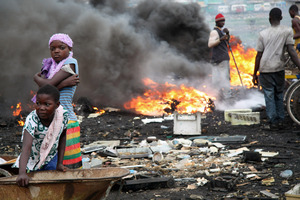 Who does toxic pollution affect the most? A global alliance has come together to issue the first comprehensive report of pollution’s impact on this invisible demographic — the poisoned poor.

“The world’s poorest people routinely face the highest risk of exposure to hazardous chemicals due to their occupations, living conditions, lack of knowledge about safe handling practices, limited access to uncontaminated food and drinking water, and the fact that they often live in countries where regulatory, health, and education systems are weak…,” notes Veerle Vandeweerd, Director, Environment and Energy Group, UNDP.

The Poisoned Poor: Toxic Chemicals Exposures in Low- and Middle-Income Countries was produced by the Global Alliance on Health and Pollution (GAHP), which includes the Asian Development Bank, the World Bank, the European Commission, UNDP, UNIDO and other agencies and governments.

Among the document’s key findings about the poisoned poor:

Read the rest of the Sept/Oct Newsletter

This entry was posted in Global Alliance on Health and Pollution (GAHP), Reports/Guides, Uncategorized and tagged GAHP, Poisoned Poor. Bookmark the permalink.