Radiation 101: What is it, how much is dangerous, and how does Fukushima compare to Chernobyl?

Our last blog post about Chernobyl generated a lot of interest among our friends, but seemed to raise more questions than it answered.  Many people asked for more basic information about radiation and more comparisons between Chernobyl and Japan, and safe levels versus dangerous levels.  In light of that, we have compiled this follow-up post.

First Things First – What is Radiation (in plain English)?

In our last post, we showed lots of pictures of this little yellow Geiger counter that we used to measure radiation. So what is this thing measuring? 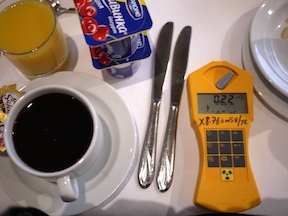 The New York Times has a nice article providing a bit more detail about these three types of radiation and other terms commonly associated with radiation.

How Much Radiation Is Dangerous?

It depends who you ask. Some people will say no amount is safe, but that doesn’t really help us understand the relative dangers. Here are some basic numbers to use as a guide (μSv means microSieverts):

40 μSv – The radiation you receive by taking a flight from New York to L.A.

100 μSv – The radiation you receive during a dental x-ray

3,600 μSv – Average radiation a US citizen receives in a year from all sources

So How Dangerous Are The Levels In Japan?

The short answer is, not very, unless you are close to the Fukushima plant.  Keeping the standards described above in mind, let’s examine this map of radiation levels in Japan. Tokyo usually has a background radiation level of .04 μSv/h.  On April 5, the level was .12 μSv/h. That’s more than double, but is it dangerous?  The short answer is no.  If we multiply .12 by the number of hours in a year (about 8766) we see that a Tokyo resident would receive about 1,052 μSv of radiation a year at current levels.  That is about 2% of the amount that the USA allows workers to receive on the job, or about a third of the amount the average American receives per year from all sources.

This is not meant to downplay that risks at the Japanese plant.  As Chernobyl showed us, this is a technology that can quickly escape our control and cause massive devastation.  However, while many areas in japan are experiencing radiation levels above the normal background level, the levels in most place are not likely dangerous.

What About Near the Fukushima Plant?

On April 6, the radiation level in the city of Fukushima was 13.9 μSv/h.  If we multiply that number by the number of hours in a year, the yearly radiation dose is about 122,000 μSv.  This number is more concerning.  Remember, the U.S. does not allow workers to receive more than 50,000 μSv per year at work.

We do know that several Fukushima staff members and firefighters have been exposed to dangerous levels of radiation. At least six staffers were exposed to radiation levels greater than 100,000 μSv (potentially increasing their risk of cancer).  At least 50 firefighters received doses of 27,000 μSv.

So How Does Fukushima Compare with Chernobyl?

The level of radiation detected at the Fukushima plant immediately after the third explosion was 400,000 μSv/h–a level that  would be extraordinarily dangerous for humans. By comparison, that level of radiation is 33,000 times higher than we recorded about 750 yards from the containment facility at reactor 4 in Chernobyl.  Of course, Chernobyl happened 25 years ago and has a cement sarcophagus over it.

It is still too early to speculate on the lasting dangers created by the disaster at the Fukushima plant.  Like Chernobyl, it is likely that an exclusionary zone will be created around the plant, and that some residents who lived nearby will never return home.

If you would like to learn more about radiation risks and scientific disputes on the issue, check out the following New York Times article titled Radiation Is Everywhere, But How To Rate Harm.

Again, we recommend watching the documentary The Battle of Chernobyl.  It details the incredible circumstances that followed the Chernobyl accident, and the unbelievable sacrifices made to prevent a much larger disaster.

And Finally, More Photos from the Chernobyl Exclusion Zone 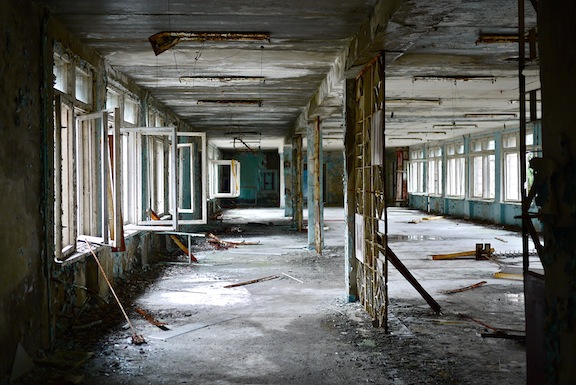 This post is from Drew McCartor, Pure Earth’s Director of Global Policy and Planning.  It was published in 2011.

6 responses to “Radiation 101: What is it, how much is dangerous, and how does Fukushima compare to Chernobyl?”