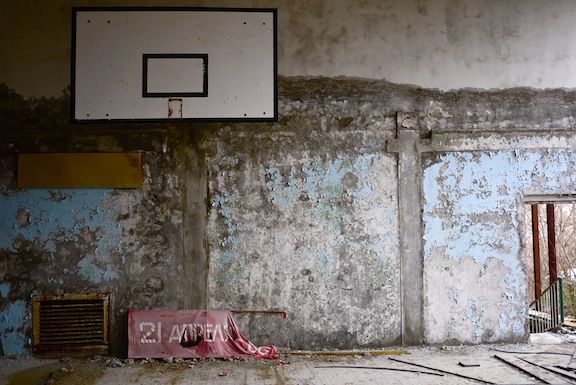 Is nuclear power on your mind? Us too. As part of a site assessment trip to Ukraine, Pure Earth staff and technical advisers visited the world’s worst nuclear disaster site. On April 26, 1986, a series of explosions occurred at the Chernobyl Nuclear Power Plant sending a plume of radioactive smoke into the atmosphere. As a result of the accident, over 300,000 people were evacuated from areas of Ukraine, Russia and Belarus. Now, almost 25 years to the day after that accident, we will take you on a tour of the abandoned city of Pripyat and describe the legacy of this disaster.

On April 2nd, Pure Earth staff visited the 19 mile wide Chernobyl Exclusion Zone that was evacuated in the days after the explosion.  Access to the area is still tightly controlled.

The Exclusion Zone lies about two hours north of Kiev by car.  Before leaving our hotel, we recorded the background level of radiation in Kiev.  Using a Geiger counter to measure three types of radiation (alpha, beta, and gamma), we recorded a total radiation level of .22 microSieverts per hour (μSv/h).  For comparison, this is approximately the same level we recorded in Pure Earth’s New York office.  Use this handy chart to understand common exposure levels in microSieverts and there corresponding danger.

On our bus ride from Kiev to the Exclusion Zone, we watched a fascinating documentary called Battle of Chernobyl, that describes the months of work by over 500,000 people to contain the fallout and prevent a second explosion that would have wiped out nearly half of Western Europe.

As you leave Kiev, the scenery becomes bleak quickly.  The area between Kiev and Chernobyl is largely agricultural, and the road is dotted with small farming towns that appear economically depressed.  After two hours you reach the Chernobyl Exclusion Zone and pass through the first of two strictly controlled checkpoints.  The Exclusion Zone is the area from which all 50,000 residents were evacuated on April 27, 1986, the day after the explosion at the Chernobyl Nuclear Plant.

The scenery begins to look eerie after entering the first checkpoint.  The road into the Exclusion Zone is lined with forests on either side, but when you look deep into the trees you can see that there are abandoned houses deep in the forest.  It becomes clear that the forest has reclaimed entire neighborhoods.

Our first stop within the exclusion zone was in the little town where the 3,500 engineers, scientists and military officials that work and live in the exclusion zone reside.  We entered a small museum where we were shown maps of where the radiation had migrated (with our location as the epicenter) and then were asked to sign a health liability waiver.

The next stop was a field that had several military vehicles that were used in the weeks following the explosion.  Each vehicle had a radiation sign next to it and our guide told us not to touch the vehicles because they were still “hot.”  The Geiger counter read 2.72 μSv/h next to the treads of one tank, roughly 20 times the level at the first checkpoint.  However, spending an hour next to this tank at this level of radiation still exposed us to only 6% of the radiation we were exposed to just by flying to Ukraine (proximity to the sun when flying is a common source of mild radiation exposure).

Just behind this field there was a neighborhood of abandoned houses.  When our military escort was not looking, I (Drew) was able to sneak off and examine some of those houses.  The houses were mostly bare except for gas masks littered around the floors.

Moving closer the actual nuclear plant, the levels on our Geiger counter began rise.  Chernobyl has six nuclear reactors.  Reactor four was the one that had the explosion and meltdown.  Reactor four is currently contained in a shelter built in the months following the accident.  The shelter was designed to last approximately 30 years.  This year, the shelter will be 25 years old.

Our bus finally stopped surprisingly close to reactor four, perhaps 500-1000 yards away.  After watching a documentary on the bus about the limitations of the containment facility, it felt a bit too close.  Standing near the reactor, the Geiger counter read 12.4 μSv/h, nearly 100 times the level we recorded at the first checkpoint, and 100 times the average background levels in Kiev and New York.  Risks from radiation exposure are a function of the radiation level and the duration of time spent exposed.  Although the levels near reactor 4 were 100 time higher than background levels, we were only there for 15 minutes and were not in danger (although I would not have wanted to be our guide).  Review the radiation chart again.  In reality, we were probably exposed to more radiation in our flight to Ukraine than in our visit to Chernobyl.

After visiting reactor four, we were treated to a lunch in the cafeteria used by Chernobyl workers.  The cafeteria was situated directly between reactors four and six.  Although the Geiger counter recorded relatively low levels of radiation, it was an odd feeling to eat anything prepared so close to these reactors.  I will say, however, that the Borscht was quite nice!

The next stop was the ghost city of Pripyat, located very close to the nuclear facility.  This was the most remarkable and eerie part of the visit.  Residents of the city did not hear about he accident until a full day after the explosion that sent a radiation plume over the entire area.  When the roughly 48,000 residents did learn of the danger, they were given two hours to pack a few belongings and leave their homes forever.  Today, nature has taken back much of the land, and the city looks like the set of a horror movie (think 28 Days Later or any kind of mutant/zombie movie).  The pictures of Pripyat speak for themselves.

The most difficult part of the visit was the elementary school.  The school appeared to have been abandoned mid-day.  Supplies and schoolwork were littered along amongst the broken glass and gas masks.

After visiting the elementary school, we went into the cultural center that had been opened just months before the disaster.

This post will be updated with more information about radiation and comparisons to Japan’s disaster in the coming days.  Visit the blog again soon to learn more.

This post is from Drew McCartor, Pure Earth’s Director of Global Policy and Planning.  It was published in 2011.

9 responses to “Virtual Tour of Chernobyl”